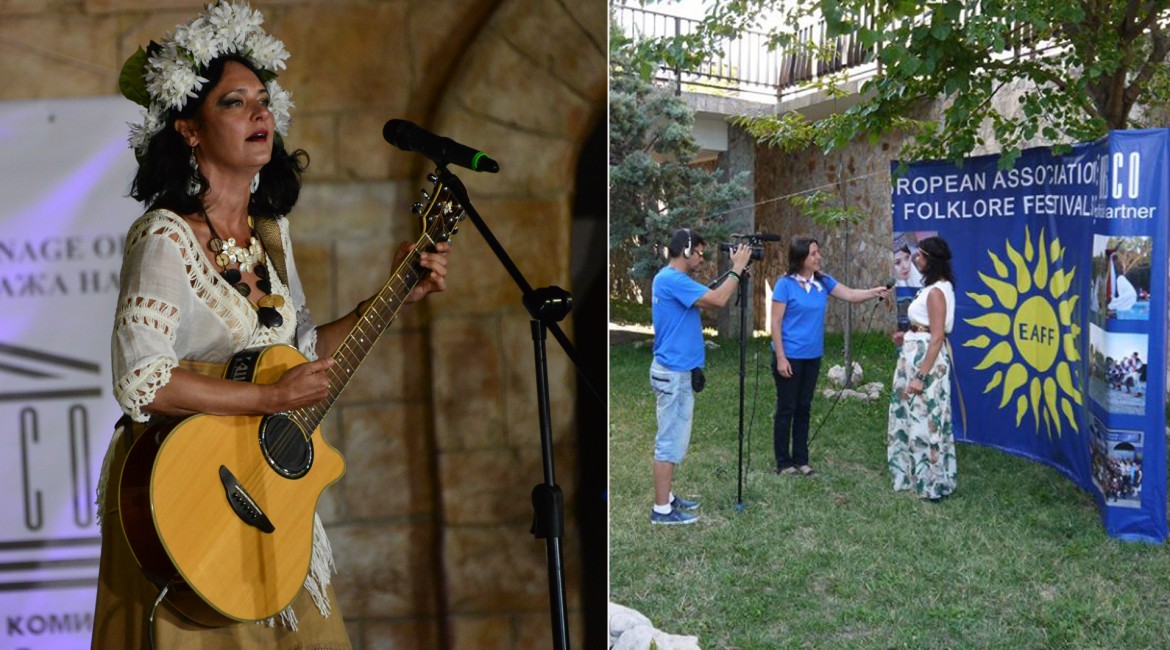 One of the emblematic Bulgarian songs "Hey, pole shiroko"* is part of the new music album of Russian etno-rock singer, musician and composer - Mila Rozhkova (Moscow). She has taken part in the festivals and championships of the European Association of Folklore Festivals - EAFF that are held in Bulgaria and abroad. Mila is winner of numerous prestigious awards from her performances: diplomas, golden medals and a nomination for Grand-Prix. Her performances are included in the shows broadcasted in Internet EuroFolkTV each month.

Folklore song "Hey, pole shiroko" is well-known among the audience of Bulgaria in the performance of the famous folklore singer Gyurga Pindzhurova. The performance of Mila Rozhkova was firstly heard in front of the audience of the VI World Championship of Folklore "World Folk 2016" in the Bulgarian Black Sea resort Obzor. The Russian musician sang it with her own arrangement, which, in combination with the deep and dense timbre of her voice, gave depth and breadth of performance. She was applauded loudly by the audience and highly appreciated by the international professional jury.

"The arrangement of the song "Hey, pole shiroko" I wrote specifically for my performance at the World Championship of Folklore in Bulgaria held in August 2016. When I sing this song I remember the beautiful view of the mountains and hills in Veliko Tarnovo, while walking in the Tsarevets Architectural and Museum Reserve. I feel myself a warrior on earth and at the same time a mother. I often play this song in Russia. It sounded in many of my appearances, including the "Music Summer-2017" Folklore Festival and the recent charity concert on the Day of the Father's Defender - 23rd of February. "Hey, pole shiroko" was also welcomed in Belarus! 11 songs have been released in the album. Among them is a song by the famous Mihail Oginsky*. I decided to sing her in Polish. But the original text of this song is in Belarusian. I'm also planning to make a Belarusian version. "

That was said by the Russian singer for EAFF. She expressed her regrets that this year she won't take part in the festivals from the system of EAFF in Bulgaria, but said that the songs that are recorded in her new album are in different languages and she has prepared them especially for the festivals that she is going to take part in.

* "Hey, pole shiroko" is a famous Bulgarian partisan song. According to the collection "Bulgarian folklore art in thirteen volumes", T. XIII, authorship is unspecified. The text was published for the first time in the "Songs of the Bulgarian Workers' Movement 1891-1944". There is a statement that the lyrics are written by Lena Chencheva and the melody is adapted from an Ukrainian folk song. The first recording of the song was performed in 1958. The arrangement is by the composer Hristo Todorov.

** Polonaise in A-minor was written by the Polish composer Mikhail Oginsky in 1794 and is one of the most famous polonaises. It is believed that Oginsky wrote this work, leaving Rech Postpituniu, after the Russian troops were overthrown by the Uprising in Kostuszko, where he was involved.