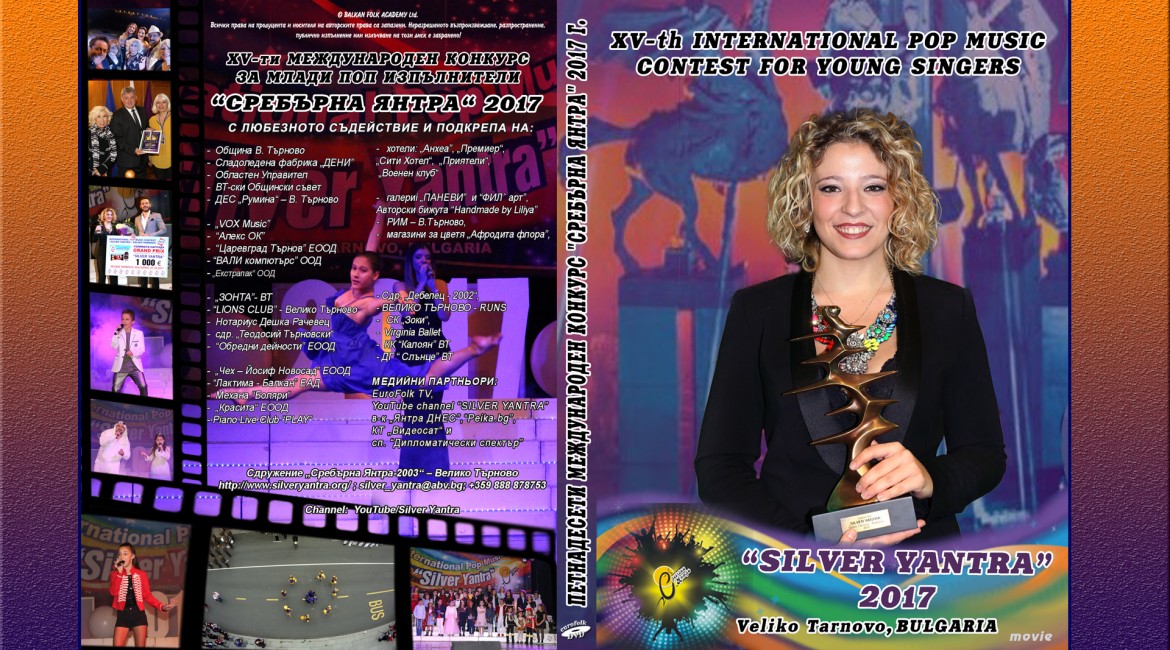 For another year Euro Folk TV was a media partner of the International Pop Music Contest for Young Singers "SILVER YANTRA" and produced a film for the 15th Jubilee edition of the competition. The musical event, initiated and organized by the Association "Silver Yantra-2003" in partnership with the Municipality of Veliko Tarnovo, took place from 29.09. until 01.10.2017 in Veliko Tarnovo.

The premiere of the film will be on 21 February (Wednesday) 2018 at 17:30 in the in the reading room of the Regional Library "P.R.Slaveykov" - central building – 2, Ivanka Boteva str., Veliko Tarnovo. The entrance is free!

The 80-minutes film meets us with the winner of Grand Prix - ROSIELA ZITIELO, at the age of 22, (Italy), who just a few days after "Silver Yantra" was ranked among the semi-finalists of "Arena SANEMO" 2017; with the international jury, led by the pop-rock diva SILVIYA KATSAROVA; with foreign and Bulgarian producers and directors of international competitions and festivals; with participants from the new demonstrative shown category “FAMILY GROUP”; with the laureates and a large number of artists aged from 5 to 25 from Italy, Malta, Finland, Slovenia, Bosnia and Herzegovina, Moldova, Romania, Serbia, Macedonia, England, France and Bulgaria.

The camera has sealed some curious moments from the visit of the delegations in the Veliko Turnovo Town Hall and the meeting with Prof. G. Kamarashev; both exhibitions from the accompanying cultural program – for children's drawings "Tri Zvezdichki" / "Three Stars" by foundation "Angeli ot Lim" / "Angels from Lim" and the artist Gergana Yovcheva - the second singer of the song "Yantra" - musical emblem of the contest; the presentations of the two musicals festivals - 'WILD ROSE" - LONDON, UK  и "MICROFONO D`ORO" – ITALY; with moments from the official opening and gala concert; from the Evening of friendship "VIVA LA MUSICA"; the show "Sound and Light"; the walks to Tsarevets, Samovodska charshia and Arbanassi.

For the first time in the film were used shots, taken with drone at the opening ceremony in front of the theater, featuring singers, dancers, karate, cycling ... as well as beautiful footage from Veliko Tarnovo and Tsarevets.

During the presentation, the FIRST COPY will be handed to the Municipality of Veliko Tarnovo as a sign of respect for long-standing partnership and support.