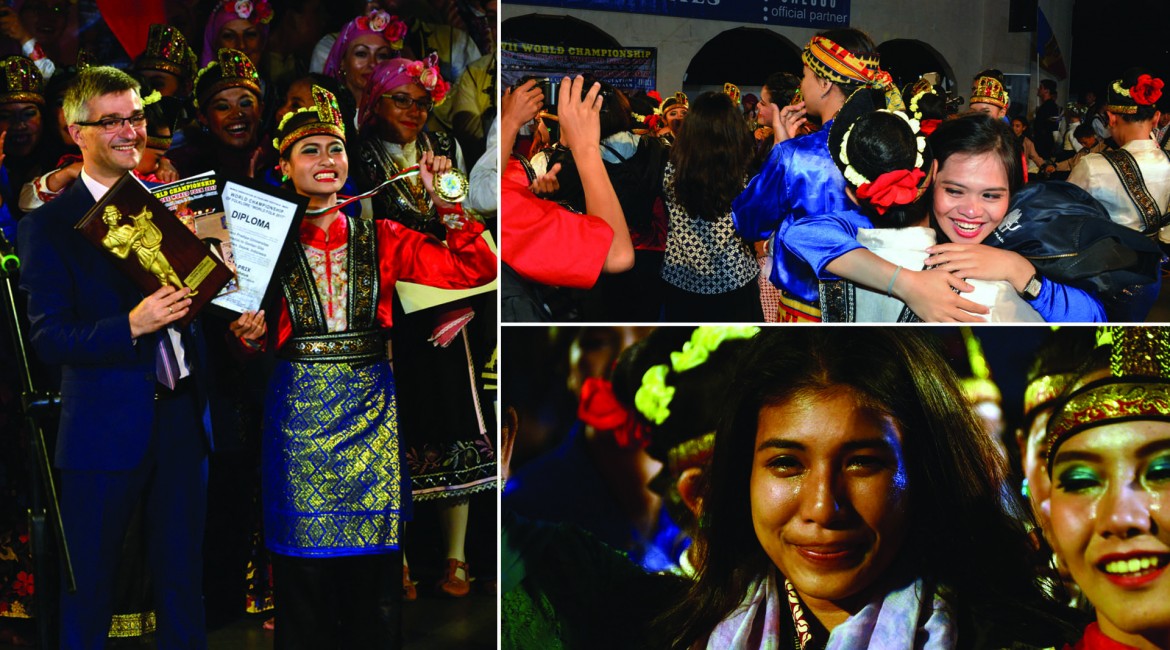 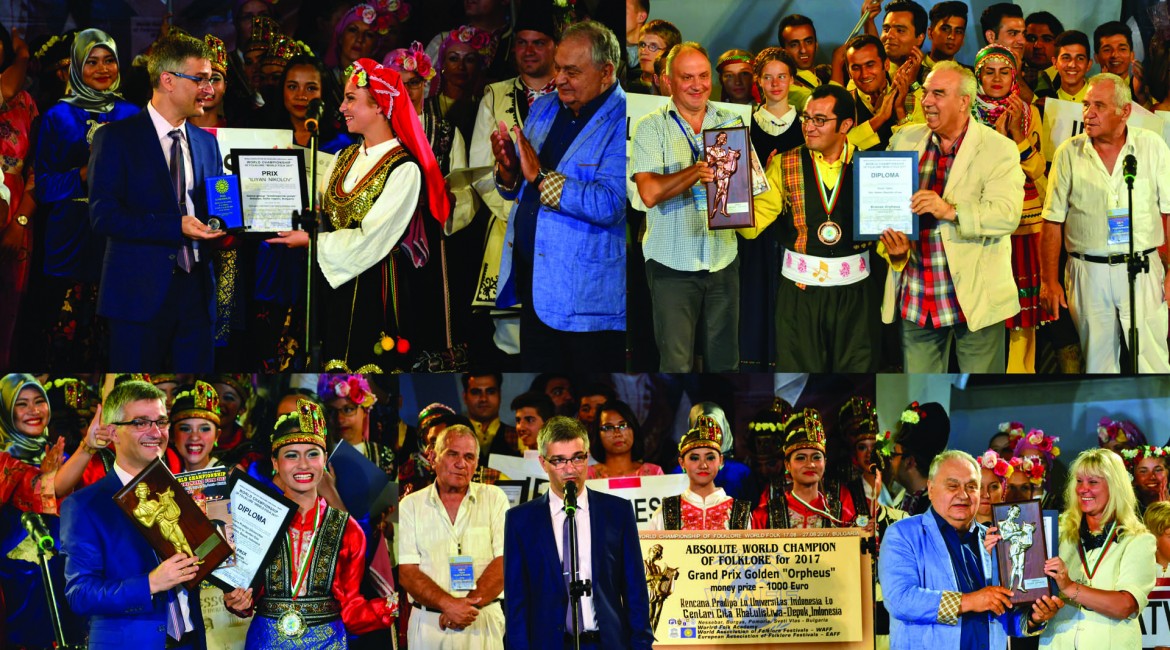 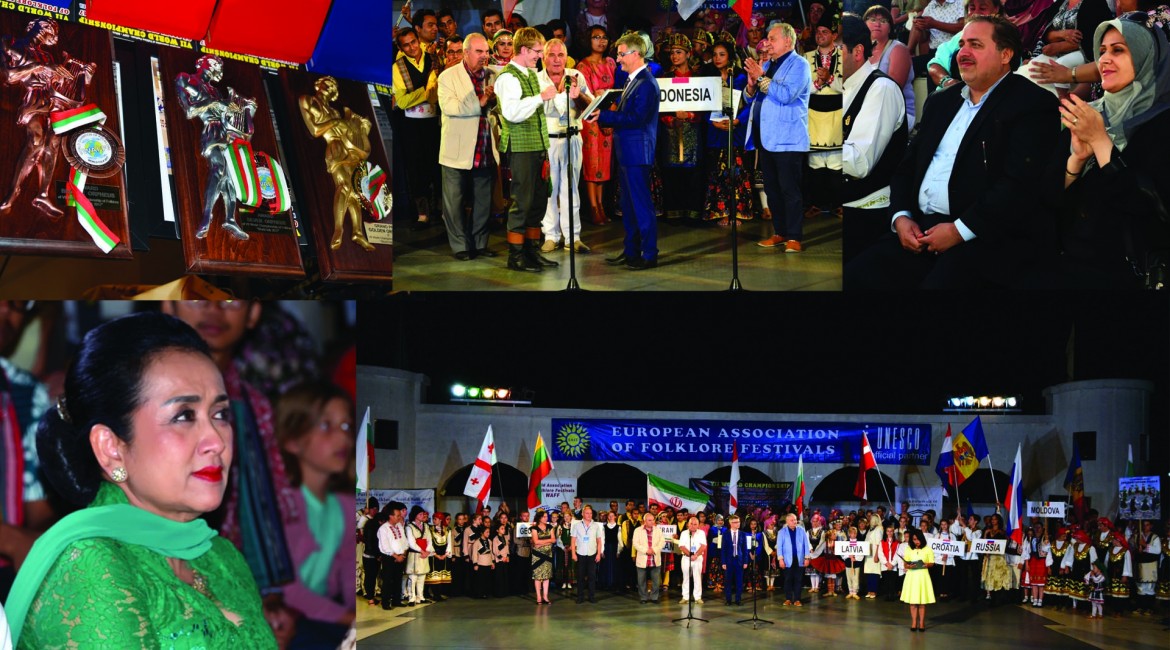 Representatives of Kencana Pradipa (Universitas Indonesia) - Depok, Indonesia and their art director Donny Yoshinda won the first place at the World Championship of Folklore. The winners of Grand Prix Golden "Orpheus" received the Golden medal of the championship and the title "Absolute World Champion in 2017". The award - Golden "Orpheus" as well as the check of 1000 Euro, provided by the organizers, were given by the president of the World Association of Folklore Festivals - Kaloyan Nikolov.

The second place is for Latvian Folk Dance group "Pastalnieki" at NGO "TDK Pastalnieki", leaded by Aija Ruliete. The group won the Silver medal of the championship and the title "Absolute Vice Champion in 2017". Award was given by Prof. Nikolay Kravtsov - the chairman of the international jury.

Third the performers from Avaye Tabari - Sari, Islamic Republic of Iran was ranked. Bronze medal of the championship and the Bronze "Orpheus" were awarded to the group from Valko Lyubenov, honorable cultural worker, deputy chairman of Commission 6 at International Organization of Folk art - IOV UNESCO.

During the official closing ceremony of VII World Championship of Folklore "World Folk" 2017 the following special prizes were awarded:

Tambura orchestra from Dugo selo (Croatia) won the Special award on behalf of the District Governor of Burgas Mr. Valcho Cholakov - a Diploma and Photobook "The wonders of Bulgaria".

Municipality of Burgas and mayor Dimitar Nikolov assessed the Folklore Ensemble "BALGARANI" from Sofia (Bulgaria) with a Diploma for preservation of folklore arts and the sign of Burgas Municipality.

Special award of Municipality of Nessebar and the mayor Nikolay Dimitrov - a diploma for preservation, promotion and honorable presentation of folklore art as well as Photobook "Nessebar - ancient heritage" won the Orchestra from the University of Indonesia, Depok town (Indonesia).

Special award of National Commission of UNESCO for Bulgaria under whose patronage the VII Championship "World Folk" was held - a Diploma for excellent presentation and Photobook "Balkans - shared heritage" were given to the Folklor group "Ratilelis" (Lithuania).

Special award of the World Folk Academy - one of the main organizers of the World Championship was for the Vocal ensemble "TAOBA" (Georgia).

For the first time the most recent award from the Euro Folk Music - Prize Iliyan Nikolov for the continuity between the generations was given to the Dance group "Srednogorski polah" from Ihtiman (Bulgaria). The prize was initiated in memory of Iliyan Nikolov, the creator of Euro Folk Musical Feasts and the European Association of Folklore Festivals - EAFF.

The youngest participant of the championship was from "Srednogorski polah" - 3-year-old Alexandrina Westerlund from Ihtiman won a prize as well.