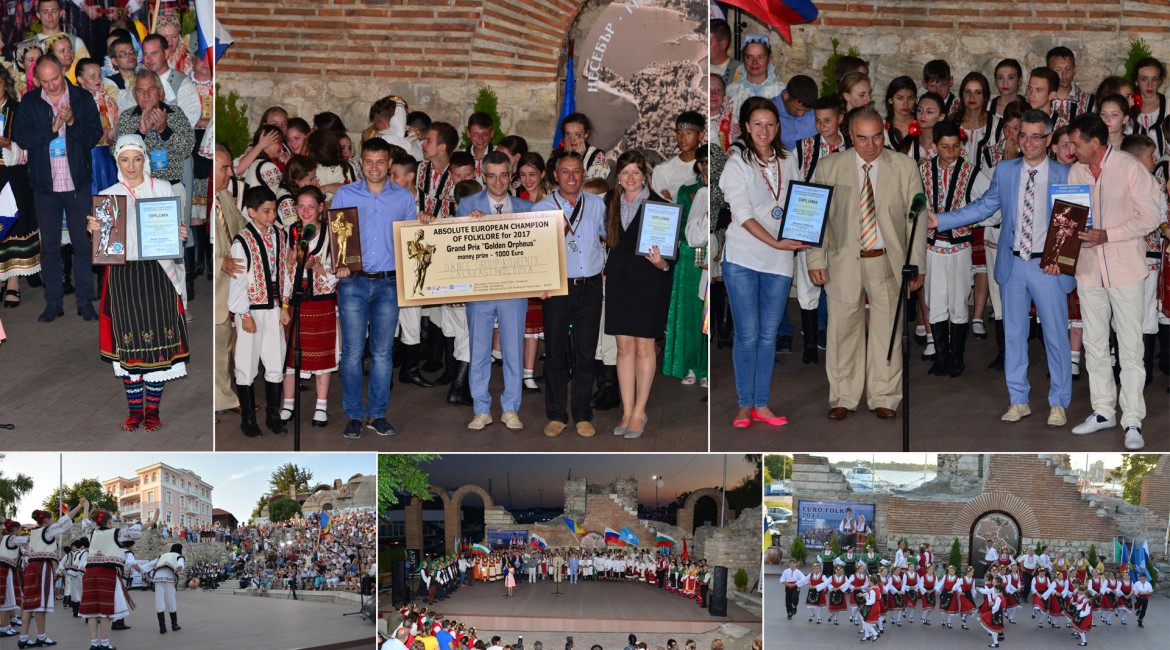 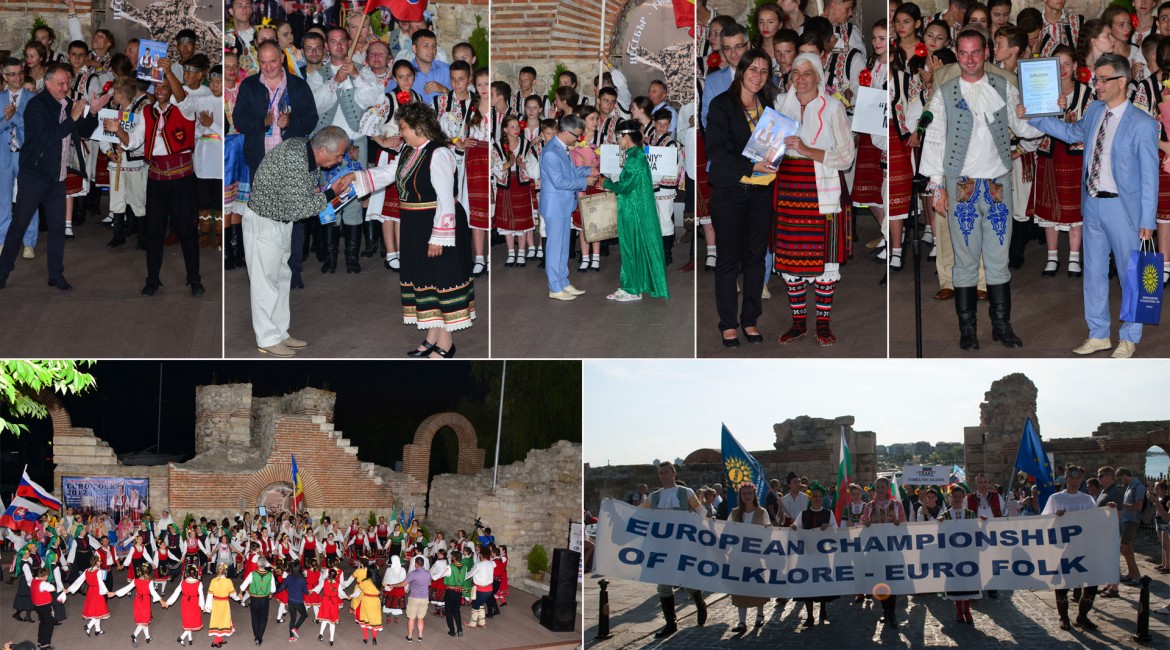 Folklore dance ensemble "Kodreniy" (Calarasi, Moldova) won the Grand Prix Golden "Orpheus", money prize of 1000 Euro and golden medal of the IX European Championship of Folklore "Euro folk". The group is directed by Igor Filipchuk and Goergi Farkulitsa. Ensemble became an Absolute European Champion of Folklore 2017. Award were given during the closing ceremony of the championship by Kaloyan Nikolov - president of the European Association of Folklore Festivals - EAFF. Both artistic directors are honored by the jury with the titles "Maestro-Academician". Irina Cojocaru - Second Secretary on Consular Affairs, acting as Head of the Embassy of the Republic of Moldova in Bulgaria came especially for the event. She greeted the dancers, organizers of the championship and guests on both Bulgarian and Romanian language.

Absolute Vice-European champion of folklore of "Euro folk 2017" became Vocal Ensemble "Ivanka" from Ivanteevka (Russia). They won silver medal leaded by Olga Vladimirovna Malinkina - their artistic director. Fifth talented singers took part in the first days of the contest. Silver "Orpheus" and the diplomas will be sent to the local authorities with the recommendation to officially award the winners.

Third place of the European Championship of Folklore was for the Dance group "Trake", Stamboliyski (Bulgaria). Art director  of the group is Zhaneta Ivanova. Bronze medal of the championship is given by Valko Lyubenov - director, choreographer, pedagogue; Doctor Honoris Causa of Folklore Music and Dance by Anstend University England; honorable cultural worker, deputy chairman of Commission 6 in the International organization of Folklore IOV - UNESCO.

More than 70 folklore groups from Bulgaria, Russia, Latvia, Moldova, Yakutia, Slovakia and others with more than 1500 participants took part in the IX European Championship of Folklore. After a contested race, the jury awarded the gold "Orpheus" nomination to 7 of them. 48 groups and individual performers in total were awarded with 21 golden, 20 silver and 7 bronze medals.

At the closing ceremony of the championship were given the following diplomas and plaques:

Female folklore choir from Merdanya village (Bulgaria) received the Special award by the following criteria "Complexity and technique of performance". The award was given by maestro Georgi Yankov - conductor and musical specialist, member of the jury. Dance ensemble "Milanovo" (Bulgaria) was awarded in the category "Presentation - vision, requisition, production, selection of repertoire". The prize was given by Mariana Nutsova - ethnologist, director of Eurofolk TV and a member of the jury. The Special Prize for Criteriа "Stage Behavior" was awarded to the Folklore dance group "Kitka" - Rakovski (Bulgaria). The award was presented by Valentin Halvadzhiev - choreographer and member of the jury.

Hosts from Municipality of Nessebar gave their special award to Dance group "Sikkier" from Republic of Sakha (Yakutia). The group as well as the "Ivanka" Ensemble were greeted by Oksana Zherovnaya - Consul at the General Consulate of the Russian Federation in Varna (Bulgaria). She arrived specifically for the final concert and the official closing of the 9th European Championship of Folklore "Euro folk 2017".

The prize of Eurofolk Internet TV, the main media partner of the European Championship of Folklore "Euro Folk" 2017, deserved the "Degli" Dance group in Baldon (Latvia), which also took part in the first part of the championship. The prize will be sent to the local authorities in order to award the group properly.

During the Championship, the participants also joined a parade through the streets of the old town of Nessebar. Hundreds of residents and guests of the sea town watched the group's parade.

Official closing ceremony of Euro Folk 2017 was held in the "Antique amphitheater" in Nessebar. Hosts of the championship in the period June 30 till July 9 were also the stages of Pomorie and Sv. Vlas.