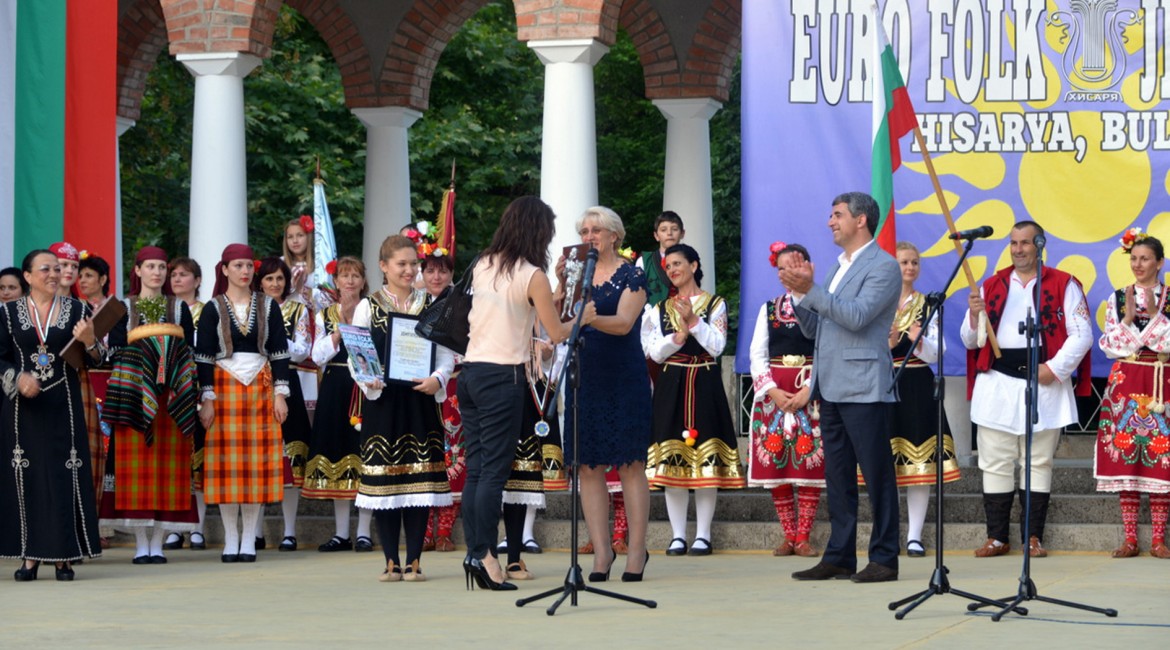 The lights went out ...  IV Balkan Championship of Folklore „Euro Folk – Jiva Voda”, Hisarya 2015 is in the history.

The scene became empty ... More than 3000 participants from all over the country and abroad performed in front of professional jury...

The audience is gone ... Applause, which were saturated with adrenaline and emotions, abated ... Until the next Championship...

Participants remained with the prizes, the wonderful memories and new friendships ...

The balance of the four contest days: a lot of participants were announced for Discovery of the Champion; 53 golden, 56 silver and 48 bronze medals were granted; the participants received certificates and diplomas for essential contribution in folklore arts, references for participation in the European and World folklore championships in July and  August in Nessebar and Sunny Beach.

The bronze „Orpheus” and the bronze medal in the general ranking  of the Championship is one more acknowledgment for the longtime creative work of singers from Folklore formation „Chemerika”. The award was granted by the mayor of Hisarya, eng. Penka Ganeva.

The group has 20-year story, as in the last 10 year its conductor is Darena Popova. She also leads Academical Choir „Angel Manolov”. She determines her artistic biography as a "firman" . She is on the stage for 33 years and has numerous awards from all around the world. Three times, she is conductor number one in the world.

„But the quality of the performances of the group does not depend only on the conductor, no matter how acknowledged he is, but also from the “material”, is joking Darena Popova.

About how quality is the “material”, talk the numerous concert tours abroad and the firs awards of the formation from participations in international contests and festivals in Iraq, Syria, Jordan, Turkey, Macedonia, Serbia, Italy, France, Greece, Holland, Hungary, Germany, Spain and other countries.

The repertoire of the formation is very rich and includes entirely a cappella performances. The singers with angel voices are not professionalists. Among them, there are housewives, teachers, engineers, economists... The love to the song gathers them together. They perform Shoppian authentic folklore, with colorful solos, but mainly sing folksongs, processed by famous composers.

We said goodbye to choir ”Chemerika” with the promise to meet again in July the European Championships in Nessebar and Sunny Beach.

Silver „Orpheus” and silver medal in the final ranking for Representative folklore group “Tangra”, which is on the stage from 13 years. Only a step away from the great success, even with their firs participation in Balkan Championship “Euro Folk”! The award was granted by the president of the European Association of Folklore Festivals – EAFF – Kaloyan Nikolov. In the contest program, the dancers performed with 6 dances in 3 age groups.

„The championship has emerged as an extremely strong, with great competition. We have shown only a small part of our rich repertoire. With the exception of the Dobrudzhan, we have dances from all other ethnographic regions – created by famous and not so famous choreographers, by my colleagues  Occasionally I allow myself to create something mine.”, says the artistic director  Maria Terziyska, and she adds, that success is achieved with hard work, „but with a lot of heart, because children trust the sincerity.”

Besides a lot of desire and work by the children, for best results, there are other "guilty" - mothers, grandmothers, the community center, the municipality, without whose support there is no way to make things right. The grateful Maria Terziyska adds:

„We could not see much of the performances of the other participants, but  we liked a lot the things we saw. We hope, that there will be more good groups. Those who already performed, should try to raise for themselves the level, because they can do more, to be raised the level of the Championship.”

Golden “Orpheus”, the title Absolute Balkan Championship of Folklore and check for € 1,000  was deservedly won by one comparatively young group - Ensemble „Sedenchitsa”. The formation was created 2,5 years ago, by former and current students of profile "Choreography" in “St. Kiril and St. Methodius” Secondary School – Plovdiv, amateur artists and dancers from the Club „Sedenchitsa”, which grows into Ensemble.

For these hearty young people, the success is hided in the enormous desire and the numerous rehearsals. In the contest program, they represented with two dances from different folklore regions - “Rachenitsa” by choreography of Dimitar Doychinov and “Shopska siuita” by Dimitar Dimitrov.

„We tried to present ourselves in a better light than last year.  We still can not realize what is happening and how it looked  from the side of the audience. We hope it happened good – we are still – subservient to the emotion .”, shares excited Neli Karabahchieva, who is art director of the group, after their nomination for Grand prix.

About the life in the collective she sais, that they are “like one big family, that is happy, that every one free minute is dedicated to the dances. We have the opportunity to gather two times a week, as in the weekends. We travel abroad and we make concerts in the region.”

Did they expect such dizzying success? Here is what the dancers shared in front of our team after receiving the award by the President of the Republic of Bulgaria - Rosen Plevneliev.

„We are extremely excited. We can not tell, that we expected that. That is why, probably, our joy is so big. Because this is a result of hard work, a lot of enthusiasm and a lot of energy. It is a great honor for us, that exactly the President granted us the award. This is an emotion, that should be experienced.  We have a vision of how to use the prize of 1000 euros. We are amateur ensemble and do everything by our own. The money will be used for our wardrobe – we will sew new costumes . We have desire, ambition and energy from here on to cover new highs. We thank wholeheartedly!”

In the creative biography of the ensemble are recorded participation in „Folklore panorama 2015” in National Palace of Culture, Sofia and international performances in Black forest and Croatia. The jury of “Euro Folk – Jiva Voda“ granted to them invitation for participation in the World folklore championship in August in Nessebar and Sunny Beach, but teen finds them with already prepared program for the summer  – participations in festivals in Italy and Kosovo. We promise to see each other next year. But surely the highest award of the folklore festival in Hissar would be a milestone in their professional growth.  And perhaps one of the most precious memories, because ...   „the first Grand Prix can never be forget!“...